With Yazhini and our awesome ob-gyn Anshu Bansal

What does making a baby have anything to do with marriage? Marriage is, after all, a social contract. And weddings, the face of marriage, are displays of social status. This is why the interpretation changes with religion, government and culture. One can decide whether they want to get married or not. This has nothing to do with creating themselves a family. Sadly, most people find this hard to believe.

Basic biology teaches us that sex (sometimes protected and most of the times unprotected) can result in a pregnancy. Feminism 101 teaches us that a woman can before, during and thereon choose what is done with her own body.

After the fourth pregnancy test turned positive pink, I made it clear to Muthu with a strange and silent stare, ‘This baby is going to happen. You can be as involved as you want to be.’ This is a line that could confuse even the very feminist boyfriend, because life plans will be changing. We had a short argument and decided together to learn how to do this day by day. Before that, we had to tell our parents!

My parents are cool, okay. But, pregnancy is always a bomb of a news. We asked a family friend for some advice and she wanted to cushion the fall. She said that the man must first ask for the girl’s hand and then reveal the news of the baby. We did so and parents were so happy. Maybe, it was their drop out, job-skipping, kind-of-artist girl baby finally settling down in life that overjoyed them or also the prospect of a grandchild. They did have their worries about this choice of mine, but they kept their disapproval to themselves and spread joy.

Both of us never wanted to get married, but we decided it wasn’t a very bad idea if it could  allow us a peaceful pregnancy with both the families support. However, what we faced was long days of drama on how live-in-relationships imported from Western cultures cause such unwanted mess, on whether we should simply register or have a ceremony, but how could we have a ceremony with my baby bump, then should I just anyway get an abortion and avoid stressing out others, and were we just throwing our lives to the dogs. Meanwhile, I was growing bigger, gassier and sprouting my own species of mood swings.

The need to get married started sounding stupid to us. Who were we trying to make happy when the baby and us were pushed in to such distress? Pregnancy, by itself, is difficult. So, we endlessly postponed the marriage and gave vague answers to those family members who tirelessly inquired us. 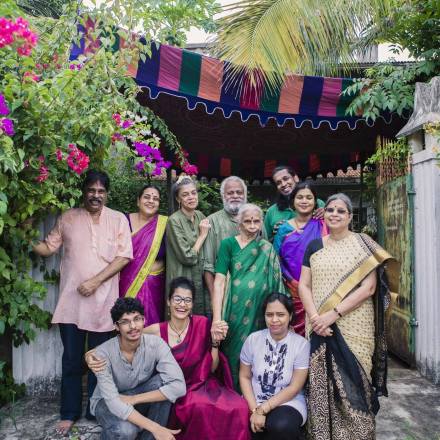 The Family at the Valakaapu

Around the ninth month, we agreed to my aunt’s request of a valakaapu (a traditional baby shower). She said it would be an auspicious event for the baby. We know jack-shit about auspicious cos-pee-shee-yus things. But, I did tell Muthu that celebrating the coming of the baby would do us good after so much tension. I was insanely scared if the baby would be fine and if I could actually survive the ordeal, and felt a few good vibes and pampering would do my pregnant soul good. Muthu warned me that it must not involve any rituals. We made it clear to everyone again and again that it would be a celebration and a house-warming ceremony. But, there were some societal demands. Some were smartly subverted (men and women drew moustaches and beards with sandhanam on me, and my sister embraced Freud and garlanded me instead of Muthu). Some chances were missed (apparently, I could have dressed goth, because pregnant women get to dress anyway they want). This was followed by a vegetarian ela saapaadu that everyone enjoyed, but most friends gave me a disappointed look, “We expected biryani and beer from you.” Left to me, I would have arranged such a feast. But, my grandmother was the chief guest.

She came with her own demands. She gifted me a karugamani maalai (mangalsutra worn by some Muslim sects and certain North Indian Hindu sects) and asked me to wear it. I should have said no, but you don’t say no to gifts. I wear it when I meet her and she knows this. She also informed us that she will tell all her friends that we had registered our marriage, because she finds it very hard to explain our choices to them. Again, I should have said, ‘No, Paati.’ I was, like, even if I say no, you are anyway going to go ahead and say so, and I also don’t really hang out with your friends and maybe this shouldn’t matter. Until…

Last month, we went to Muthu’s parents house at Peravurani for a wedding. Everyone there also believed this fantasy register marriage; parentheses with the belief that I am a Brahmin city girl. I must write about this latter part later. Muthu tried telling one of his grandmothers that we are not married and was immediately reprimanded by a sister who lives there as she did not want to receive the clout for it. 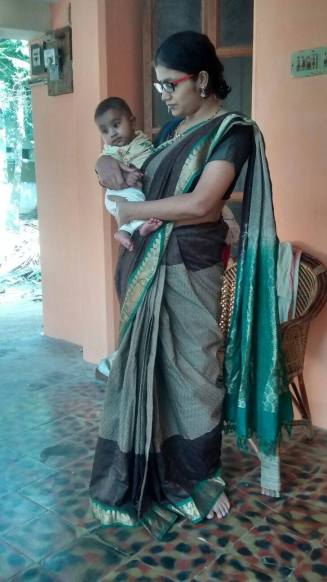 Sad part is that your discomfort with us not being married in the current social situation is understandable. How would you explain it to yourself or others? So yeah, most of our families lie to themselves and others that we are married. Once in a while, they sigh that how nice it would have been to have a wedding and do all of this with so much peace.

Ever since we returned to Chennai, Muthu has been asking me to write this and tell the world that we are not married. In fact, he has been asking me to write down our entire story beginning from one random November night that we met for the first time in our lives. Umm.. but I am a well-seasoned procrastinator. I write this now, because I am actually supposed to be editing something else.

We are never going to get married. Hell, we don’t even think we will be monogamous. Now, how is Yazhini going to deal with this and what societal pressures will she experience because of our choices? I suppose, she is going to learn that she can make her own choices.

When I was a little child, I used to tease my father that I would just for the sake of it rebel against them and have an awesome garish ritualistic wedding. He would try to reason with me and I would insist with my silly arguments. He just patiently let me come to my own senses about it. Today, sometimes he is confused about my choice, but somewhere trusts me or in liberty to let me be myself. (Now, we are arguing about homeschooling vs schooling. This too, I shall write about later.)

Throughout childhood, adolescence and adulthood, we anyway go through a variety of identity crises. This is good. There is no point in trying to protect your child from all the possibilities out there thinking that it is going to confuse her or cause her societal pressures. It is more important to be there when she is confused and explore that territory with that same confusion. Read with her, travel with her, question the world with her, sit with her and tell her to go ahead, take her time and make her own choice. I just got to make sure that she can handle a crisis. There is no point in avoiding crisis or simply waiting for the rest of the world to become an accepting and peaceful place. That is not going to happen until we first make our choices and continuously challenge status-quo. Indirectly, this is what my parents gifted me, though they sometimes interpret it as failing to protect me.

24 thoughts on “Are those two people your parents only because they are married?”

Chew on this Cancel reply

Name? As a kid, I used to think pork was a special variety of mutton with the world's best cheese attached to it.
Type? Yeah, food blog.
Where? Chennai, Tamil Nadu
Writer? Sam PC

Me: Did Buddha eat pork?
Baba: Yes. It is said that he died after a tube worm grew out of his head.
Me: Oh, because historian N Jha has written about history of meat eating in the country and has cited instances of Buddha and Mahavira eating meat. He is now walking around with police bandobast battling death threats because of his book.
Baba: Great timing for such a book.
Me: So let’s make cheese mutton tonight.
Baba: Of course!